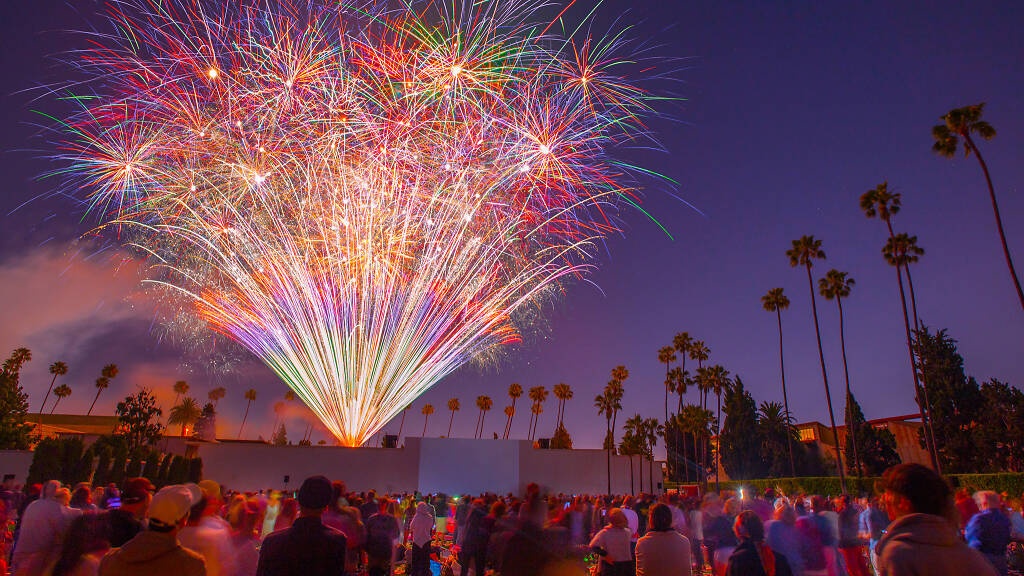 From patriotic parades to oceanfront fireworks, these are the best 4th of July events in Los Angeles
Looking for 4th of July events or things to do with the family? Spend Independence Day hanging out at one of the best beaches in L.A., eating the city’s best BBQ, cooling with with classic frozen desserts and having fun at these kid-friendly events, neighborhood parades and celebratory festivals. The best part about most of these 4th of July events? You can end the evening with a patriotic bang of dazzling fireworks in the night sky.

4th of July events in Los Angeles
Pacific Palisades Fourth of July Parade
Palisades Charter High School, Pacific Palisades
Cruise on up to the Palisades for a beachy Independence Day extravaganza. Starting just before 2pm, a band of patriotic skydivers will descend from the stratosphere, kicking off the neighborhood’s colossal parade. The baton twirlers and marching trombonists will begin their promenade on Sunset Boulevard, between Via de la Paz and Drummond. General admission to the parade is free, but if you want to avoid chauffeuring whipper snappers on your shoulders all day, splurge for VIP grandstand seating. The festivities continue with a concert (4pm) and fireworks (9pm), leaving nothing amiss from this year’s Fourth of July celebration.


AmericaFest
Rose Bowl Stadium, Pasadena
AmericaFest at the Rose Bowl is an explosive celebration of all things red, white and blue—from the classic American food, to a motorcycle stunt show, to the world-renowned fireworks display. The fireworks won’t shoot off until 9pm, but the Rose Bowl will open at 2pm Independence Day, at which time access to a goldmine of inflatable rides, games and crafts will be available for kid-friendly fun. Parking for the event will cost $40, but you can make it worth your while with an afternoon of tailgaiting outside the stadium. If you don’t want to venture into the stadium, the show is viewable from the areas around the Arroyo, most notably along the Colorado Street Bridge and, more distantly, from parking garage rooftops in Old Pasadena.


Fourth of July Block Party
Grand Park, Downtown
If you're on the hunt for a cheap, lively way to celebrate Uncle Sam, shake it over to Grand Park, and watch Downtown L.A. light up for free! This Fourth of July, Grand Park hosts a unique block party, featuring scrumptious food truck fare, live music and more. The music begins while the sun is still high in the sky, so bring yourself an all-day picnic—no booze allowed, only empty water bottles—and relax. Your four-legged friends are totally invited, and, best of all, the event is Metro accessible


July 4th Fireworks in Marina del Rey
Burton Chace Park, Marina del Rey
There’s something about watching fireworks over the ocean. Every year in Marina del Rey, fireworks explode over the marina channel and spectators gather all over to watch: at Burton Chace Park or Fisherman’s Village (with synchronized music) as well as from Marina “Mother’s” Beach, waterfront hotels and restaurants, and on boats. Fireworks start at 9pm and last for about 20 minutes. Arrive early to the area’s county lots and take advantage of parking shuttles.


All-American 4th of July on the Queen Mary
Queen Mary, Long Beach
Watch the Long Beach fireworks from aboard the Queen Mary, where you’ll be able to scope out concerts, family-friendly activities alongside patriotic-themed events. The evening includes live entertainment, historic tours and a patriotic film screening.


July Fourth Late Night BBQ at Aquarium of the Pacific
Aquarium of the Pacific, Long Beach
Celebrate Independence Day with the kids, a plate of barbecue and your best under-the-sea buddies. The Aquarium of the Pacific hosts a Fourth of July BBQ, in addition to late-night aquarium access and a magnificent view of the waterfront fireworks show. Reserve tickets online for the cookout, which will feature classic summer treats like coal slaw and hot dogs, in addition to fancier fare, including brisket and s’mores bars. A kid-friendly menu is also available for the little rascals in your posse. The aquarium is open all day, but discounted admission starts at 5pm.


Cinespia Cemetery Screenings
Settle into Hollywood Forever Cemetery for an Independence Day celebration on both July 3 and 4 with screenings of Mad Max: Fury Road and E.T. Pack your picnic, enjoy the movie and stay on the grass for a fireworks show afterwards. Cinespia’s pulling out all the stops for their July 4th celebration, amping up their festivities with a themed photobooth, DJ and fireworks show.


Fourth of July Community Festival & Fireworks Show
Los Angeles Memorial Coliseum, Los Angeles
Unfurl a picnic blanket on the South Lawn of Exposition Park, just next to the Coliseum, and enjoy an afternoon of music, games and kid-friendly activities, followed by a free fireworks show at 9pm.


Kaboom! Fourth of July Fireworks Spectacular
Fairplex, Pomona
What’s more American than spending your 4th of July around a bunch of monster trucks? That’s the idea behind Kaboom, an annual celebration at the Fairplex that features a monster truck derby, big-air motocross show and even a human cannonball demonstration, followed by a fireworks spectactular.


4th of July at Dodger Stadium
Dodger Stadium hosts fireworks on Friday nights throughout the season, but they do it up extra on the 4th of July. Buy tickets to see the team take on the San Diego Padres (on either the 4th or the 5th) and then stick around for a fireworks show you can see from your seat; line up on the field level near the end of the game and you can even watch from the outfield grass.


Huntington Beach Fourth of July Celebration
Huntington Beach, Orange County
Make your Fourth of July an all-day blowout by heading down to this legendary, long-running fest at the Huntington Beach Pier. The festivities kick off with a 5K run and fitness expo. Walk the parade route to the beach from 10am til noon, and then put on your Uncle Sam hat for the Pier Plaza Festival, where you’ll find live entertainment, family activities and all-American eats. Scope out a spot or grab a VIP seat for the fireworks display at 9pm, which ends in an epic 500-round finale.


Chic featuring Nile Rodgers
Hollywood Bowl, Hollywood
We don’t think anybody predicted the remarkable resurgence of Nile Rodgers a few years back but, with new material and a collabo with the world’s hippest dance act under his belt, the funkmaster general is going from strength to strength. This year, he’ll top the Hollywood Bowl’s annual Fourth of July fireworks spectacular.


See the City Sparkle: Fourth of July Celebration
Spire 73, Downtown
Watch fireworks burst all over the city from 73 floors up during this open-air party at Spire 73. The hotel rooftop bar is hosting three days of ticketed, patriotic food and drink specials; if you’re looking for the most pyro, opt for the one actually on the Fourth.


Looking for fireworks?
Where to see 4th of July fireworks
4th of July in L.A. isn’t complete without loud, colorful explosions in the night sky. After a day at the beach, cooling off with the city’s best ice cream and grilling with friends and family, cap off Independence Day with fireworks shows all over the Los Angeles region, from the Long Beach waterfront to high above Hollywood.